Warning: "continue" targeting switch is equivalent to "break". Did you mean to use "continue 2"? in /homepages/32/d127415763/htdocs/breathingmoment/wordpress/wp-content/plugins/gravityforms/common.php on line 1051

Warning: "continue" targeting switch is equivalent to "break". Did you mean to use "continue 2"? in /homepages/32/d127415763/htdocs/breathingmoment/wordpress/wp-content/plugins/gravityforms/common.php on line 1055

Warning: "continue" targeting switch is equivalent to "break". Did you mean to use "continue 2"? in /homepages/32/d127415763/htdocs/breathingmoment/wordpress/wp-content/plugins/gravityforms/common.php on line 1075

Warning: "continue" targeting switch is equivalent to "break". Did you mean to use "continue 2"? in /homepages/32/d127415763/htdocs/breathingmoment/wordpress/wp-content/plugins/gravityforms/common.php on line 4669

Warning: "continue" targeting switch is equivalent to "break". Did you mean to use "continue 2"? in /homepages/32/d127415763/htdocs/breathingmoment/wordpress/wp-content/plugins/gravityforms/common.php on line 4675

Warning: "continue" targeting switch is equivalent to "break". Did you mean to use "continue 2"? in /homepages/32/d127415763/htdocs/breathingmoment/wordpress/wp-content/plugins/gravityforms/common.php on line 4687

Warning: Use of undefined constant PLUGIN_URL - assumed 'PLUGIN_URL' (this will throw an Error in a future version of PHP) in /homepages/32/d127415763/htdocs/breathingmoment/wordpress/wp-content/plugins/wp-google-fonts/google-fonts.php on line 81

Warning: Use of undefined constant PLUGIN_PATH - assumed 'PLUGIN_PATH' (this will throw an Error in a future version of PHP) in /homepages/32/d127415763/htdocs/breathingmoment/wordpress/wp-content/plugins/wp-google-fonts/google-fonts.php on line 82
 My letter to DTE Energy Music Theater - breathingmoment
Jennifer Cline August 20, 2014 (Metro) Detroit Happenings, Just my thoughts

I recently attended Rockstar Mayhem Festival 2014. It’s an event that I attend almost annually and greatly enjoy. When life gets busy and we miss our friends within our quick-paced lives, I can always count on seeing great friends and family at the annual Mayhem Festival.

I’m a rule follower. Metal head or not — the reputation that we get can be misleading. There are, however, exceptions to everything. Rules are put in place for a reason and are usually a result of an incident.

However, after reading the FAQ on the Mayhem website, I was led to believe that I would be permitted an unopened bottle of water and homemade snack. Seeing as the concert starts at 1pm and concludes at 11pm (11 hours of jamming, drinking and sun), it seemed like a reasonable set of rules. The Mayhem Festival website stated, “It’s a long day on Mayhem so be sure to drink lots of water and pace yourself.”

I was quickly frustrated when I arrived at the gate and was told that not only were they prohibiting my unopened bottle of water and homemade muffin I’d made the night before, the purse that was housing all of my belongings was not allowed either. The website had also stated a “lightweight backpack” could be brought, so I had wrongfully assumed that my medium-sized purse would be acceptable. Furthermore, the fact that DTE Energy Music theater sells purses larger than mine INSIDE the venue — it seemed appropriate that I could tote my items comfortably in my purse for the evening.

I was rudely awakened to the fact that I’d be carrying a bountiful bit of items for the evening: my wallet, ticket (for re-entry to the pavilion), cellphone, cigarettes, lighter, hoodie and sunglasses. Somehow, my dress-wearing, 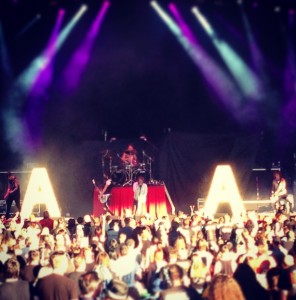 pocketless self was going to carry all of that while also holding a beverage and a $4 cup of bottled water.

It was explained to me that, “too many tickets were sold for it to be safe for purses larger than a clipboard,” by one of the gate attendants.

I think that it is fair to assume if concert-goers are forced to pick between a $10 beer or two $4 bottles of water — the choice will often be the beer. And that leaves a much smaller budget for water and safety.

It was explained to me by one of the bartenders that bottles of water must be poured into a plastic cup because the cups don’t rocket quite the same as a full bottle of water. Fair point.

However, that leads me to believe that a combination of more security and a bit less ticket sales could manage that some. How many individuals would actually take advantage of the allowance of one unopened bottle of water? It’d probably be a fair amount but still manageable if there was a fair security-to-people ratio. Additionally, if I bothered to bring the water with me – I doubt I’d be willing to sacrifice it in to a crowd of people.

And my muffin — my dear muffins. I rushed to the store from work Thursday evening, gathered some supplies and set up in my kitchen to make some homemade muffins for all of my friends. But, those cerran-wrapped goodies were banned from the show. I guess I was going to throw them into the crowd of metal heads at some point in the evening — especially since I’d spent three hours making ‘em.

Sure, much of this could have been avoided had I called DTE Energy Music Theater before heading to Mayhem Festival 2014, as the gate attendant stated was the best method. And I should have, in retrospect. But the rules listed on the Mayhem Festival 2014 website seemed to be so logical. And seeing as Mayhem Festival organizers likely know the typical behavior of its crowds, it seemed fair that they’d implement appropriate rules. But, I was surely wrong to assume such.

I have a final complaint about the evening. And really, this one is minor. Each time I ordered a drink, I was asked if I wanted a receipt. I said no (how could I possible carry any more stuff; the remnants of my purse were taking up too much arm room already). And still, a receipt printed. Your machines need a “No Receipt” option for associates to press when the customer declines one.

All of these thoughts lead me to one realization: 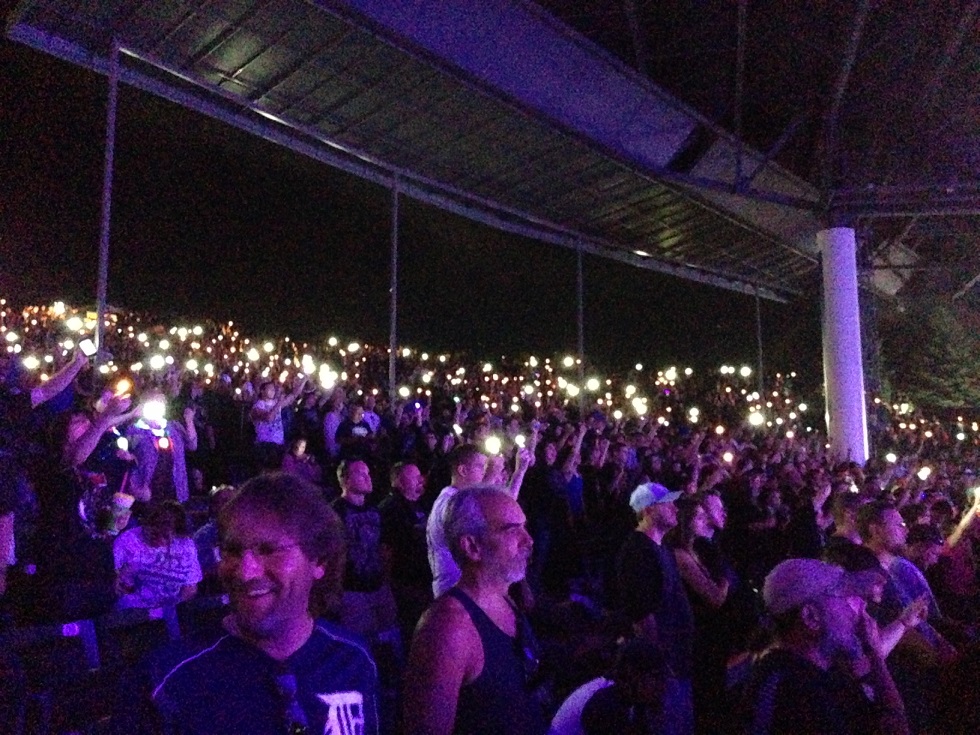 After writing this, but before publication, I attended Rockstar Energy Uproar Festival, and I was sure to call before going to the venue. After talking to a wonderful customer service rep, I was told that the same rules would apply to this concert: no blankets, no bottles of water, bags smaller than a clipboard. They also said a small snack in a see-through bag was allowed.

Upon entering DTE Energy Music Theater, however, the rules were not being applied. Blankets and large purses were being totted by many attendees. We were, luckily, permitted our small snack.

Furthermore, when we were getting checked by security, we asked the gate attendees if they were looking for liquor or guns, as a joke. One smirked and said “liquor,” and his buddies agreed. The crowd then made the joke that DTE Energy Music Theater can’t make a profit from guns, but liquor gets them revenue. Everyone, including staff members, quickly agreed.

1.) Purses larger than clipboards are being sold inside the venue, yet those purses cannot be brought into DTE Energy  Music Theater. This isn’t to say to the person salesperson should be banned – heck, I purchased one of those fabulous things to house my armfuls of items. But really, let people carry their darn purses!
Set reasonable rules, clearly state them on upon tickets being purchased and ensure everyone is aware of what they are — including staff members.

3.) DTE Energy Music Theater sold “too many tickets” for purses to be safe. Yep, you’ll just have to tote all of your goodies for the evening, because they want to cram more bodies in there while maintaining some type of order.

4.) Muffins are evil. Well, this might not be a fact. But DTE Energy Music Theater doesn’t let you bring any much-needed food in its venue for select concerts. Regardless, I would have purchased an $8 mini pizza. It’s just always good to have back-up nutrition for such a long day.

I have long-loved DTE Energy Music Theater, but I am getting tragically tired of major corporations ruining stuff for the rest of us.

That being said, I had a good night at both Mayhem and Uproar. I saw some old pals, enjoyed great music and spent a lotof money. But heck, that was your plan all along wasn’t it?